A 57-year-old female patient suffered from crushing injury on the right foot during a traffic accident and resulted in a full-thickness soft tissue defect measuring 18.0 cm in length and 5.0 cm in width (Figure 3A). An 18 cm × 6 cm peroneal artery perforator (PAP) flap was designed on the ipsilateral lateral leg (Figure 3B). The flap dissection technique was the same as described in our previous publication [4]. The location of lateral plantar artery was checked by hand-held Doppler probe. After dividing the plantar fascia and separating the junction between the flexor digitorum brevis muscle and the abductor digiti minimi, the lateral plantar artery along with one accompanying vein was dissected out. The diameters of the artery and the vein were 2.2 mm and 3.0 mm respectively. The artery was temporarily clamped to ensure the distal foot circulation. The flap was then transferred and microvascular anastomosis was performed (Figure 3C). The flap perfusion was satisfactory at the time of finishing the anastomosis (Figure 3D). The postoperative course was uneventful. Partial weight bearing was allowed one month after the surgery. Patient was able to achieve full weight bearing and normal ambulation 3 months later without difficulty in wearing the shoe.

The ideal coverage to plantar forefoot is to use durable soft tissue with minimal bulkiness and follow the principle of “replace like tissue with like” [1]. Therefore, glabrous plantar skin from the spare part of foot is the first choice. Several local flap options have been described to reconstruct the plantar forefoot defect, including V-Y plantar flap [9], plantar marginal septum cutaneous island flap [10], island lateral plantar artery perforator flap [11], and distally based or reverse medial plantar flap [3,12,13]. In particular, the conventional flap design of the medial plantar flap has often limited mobilization, but if based on its retrograde flow, the arch of movement of the flap can greatly improve. However, venous congestion is a concern, requiring supercharging or delay procedure [14,15]. The local flap option is summarized in table 1. When the defect is large (>100 cm2) or the foot is severely traumatized, a reconstruction with free flaps is indicated [16]. Although the best flap type has not yet been determined, the instep flap, due to its similar viscoelasticity to the plantar forefoot skin, is undoubtedly the first choice [2,5,16,17] Thin perforator flap (< 6 mm in thickness), composed of small fat lobules invested by dense fibrous septa allowing less gliding, is another optimal choice [4,7]. Furthermore, sensate coverage is available by including branch of medial plantar nerve with the medial plantar flap, which is crucial for plantar defect reconstruction. In the case 1, although the defect was a candidate for a reverse medial plantar flap, we were concerned about the uncertainty of the venous drainage and felt safer to perform free flap reconstruction. In the case 2, the defect was 18 cm in length, which exceeded the conventional design of medial plantar flap [5]. The peroneal artery perforator (PAP) flap provided a thin and pliable skin [4]. Based on our previous experience, using it in the distal hand and foot reconstruction, we successfully transferred the PAP flap for resurfacing of the plantar forefoot defect.

Other than the flap type, the recipient vessels are of paramount importance. The dorsal metatarsal artery, dorsalis pedis artery, medial plantar artery, and posterior tibial artery have been well reported as recipient vessels in the literature [1-3,6,18]. Particularly, the dorsal metatarsal artery and the dorsalis pedis artery are suitable recipient vessels for dorsal foot and transmetatarsal foot defects; but not for pure plantar forefoot defect. The use of the medial plantar artery or posterior tibial artery is more convenient in this situation. Zelken et al. reported the use of innervated medial plantar flaps for forefoot reconstruction and mentioned that if ipsilateral medial plantar flap was employed, it required the interposition of a vein graft in order to reach the ipsilateral medial plantar artery or posterior tibial artery [18]. Size discrepancy was encountered between donor vein graft and recipient artery, which increased the chance of thrombosis. For defects mainly located in the lateral part of plantar forefoot, as in our two cases, the recipient vessels, the just above mentioned, are too far away to reach. Although it is possible to use the plantar metatarsal artery, the diameter is usually small and requires super-microsurgical technique; moreover, the presence of accompanying vein is unpredictable [19]. The recipient vessel choice for plantar forefoot reconstruction is summarized in table 2. The lateral plantar artery is rarely reported as recipient vessel due to its deep location. However, in the middle third of the reference line we have proposed, the lateral plantar artery runs superficially between the flexor digitorum brevis and abductor digiti minimi [8]. It can be easily exposed by incision through the plantar aponeurosis and separation of the muscles, the vascular diameter is closed to the flap pedicle size. 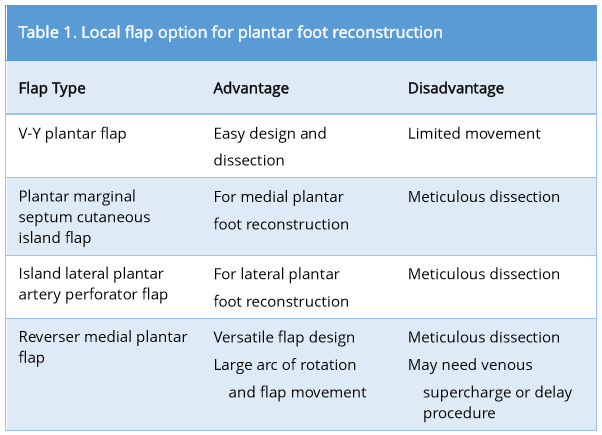 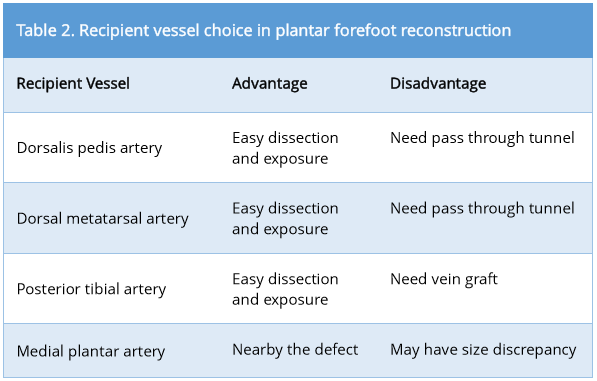 © 2017 The Author(s). This is an open-access article distributed under the terms of the Creative Commons Attribution 4.0 International License (CC-BY). SciTeMed

The revised article can be accepted for publication.

The article is accepted, please go ahead and publish it.